The Darkness of His Dreams by John W. Leys 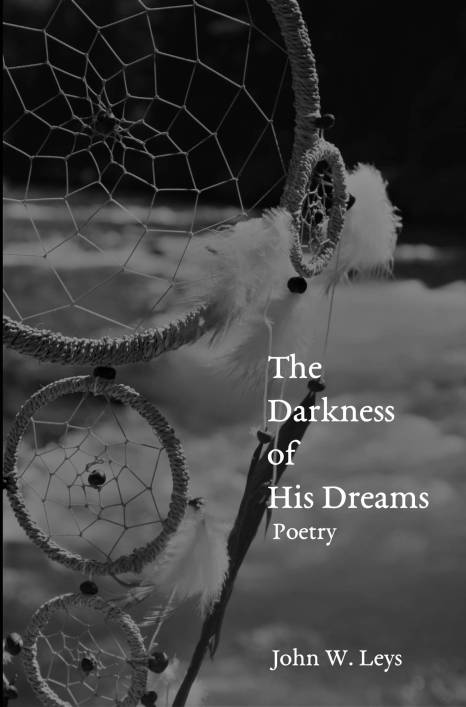 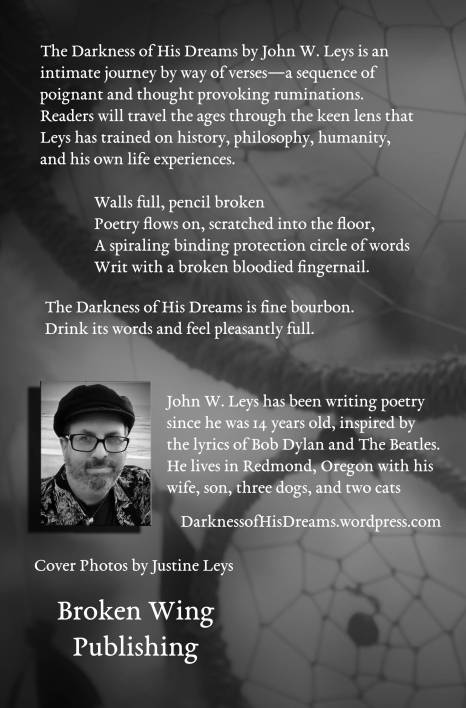 I have consistently admired John Leys as a writer for several reasons. He’s very honest to himself. He’s not an overtly crude writer, and he is true to himself and very passionate about his beliefs.

In his latest collection of poetry published by Broken Wing Publishing, in the poem the book is titled from, Leys writes; “They all want a hero /Not an uncommon want, it seems/ But in whom does a hero confide/ The true darkness of his dreams?”

It is this early poem that speaks loudest of Leys intention with this poetry collection. He’s expressing how difficult it is to meet expectations and irrespective, whom do you tell of your real feelings?

This struck me perhaps more deeply than anything Leys has thus written, for its brute honesty and how relatable this is. How often we try to be heroes of one form or another, going through life with positive affirmations, and never telling a soul of our true thoughts, and sometimes, how dark in comparison they are.

When I practiced as a psychotherapist the #1 thing clients would relate is what a burden it was to go through life trying to be tough and not being able to really speak their truth. If we take this as a snapshot of a greater picture, then many of us are trapped by convention and society from really exposing our true feelings. Leys cuts to this truth instantly and with his intuitive understanding of human nature. That said, the majority of the rest of his book until the last few poems, doesn’t really go as deep as this poem does, which I would have liked to see.

Leys collection is relatively short in comparison to some of the over-long poetry collections I have recently read. I like the length. It really works. Less can be more. The poignancy of his writing is powerful with this amuse bouche of poems, and it is exactly right. In addition Leys lost his mother not long before the publication of this book and I assumed it would be one of the over arcing themes in his writing, but there is less of that than expected until you reach the end and far more paid homage to favorite poem who have passed, or just those he admires. More than anything, Leys justifies the VALUE of being a writer/poet and how healing the process can be, how necessary, how valuable emotionally.

Leys is also clever, sardonic and funny. In his poem My Generation he writes: “I didn’t escape Minnesota in a snowstorm, / I didn’t go mad at Arfderydd / I didn’t smash a guitar at Woodstock / I didn’t drown in Delacroix.” The juxtaposition of very intensely emotional writing alongside this witty reprieve from intensity works well in permitting the reader to traverse the varied aspects of the writer’s mind, aside being relevant and amusing.

In Is There Anybody Out There? I couldn’t help admiring the sheer confessional honesty of Leys writing. Few men especially are willing to really put it all out there; “Desperately shoving notes and folded photographs / Under the cell door, hoping an Orderly doesn’t see. / Walls full, pencil broken” It says a LOT about anyone willing to ensure the scrutiny of readership when sharing their most scathing experiences. This takes a courage few writers are capable of, and a fortitude of soul that enables that author to push the envelope time and again.

I am drawn to Leys most simple pieces because whilst he is clearly a very clever man, it is the simplicity of his insight that I find so humbling and pure; “There is no tall / Without something short / To be taller than,” (Wholeness). So much is said in so little. It is perhaps easiest to be clever using long words, extensive knowledge of literature etc., but to speak simply and convey a world in a few lines, that takes a master. “Collect all the gold your heart desires, / You’ll still end your life dead.” (That Dog Diogenes).

Male writers often have a tendency to fall back on sex, desire and lust in their writing, it’s not universal but quite commonplace and it appeals to me when I can read a male writer who doesn’t use this as one of his obsessions. Even when Leys mentions sex, he does it in a high relevant way that doesn’t leave you thinking he’s just trying to get his rocks off; “I saw Diogenes last Sunday, / Masturbating in the street, / “If only twas so easy,” he said, / “To cure hunger without having to eat.”” (That Dog Diogenes). Again, that might not be as popularist as the shock-sex-fueled poets, but the intelligence and observations here are longer lasting.

There are odes to many other (nearly all male) writes by Leys, that if you like those authors/songwriters you will appreciate, and see the influences of, in Leys own well informed work. I was aware of how men tended to influence Leys far more than women, and when he does talk of women; “Siddhartha and dear mother Eve / Discuss the nature of knowledge.” (II Dreams) I felt there was sometimes something missing, which might prompt him with future work, to consider the importance of a wider audience. Although we are all guilty of our favorites and our biases.

My favorite poem is III Reflections; “What recipe will tell how much “artistic value” / Must be added to write about double-D breasts/ In iambic pentameter? / Is one asshole enough to get a book banned, / Or is it ass-fucking that tips us over the line? / Is missionary hetero-sex OK as long as / No one pisses on a crucifix,” at first glance may contain the crudity I mentioned Leys didn’t concern himself with, but I think it’s smarter than mere foul-language. I think Leys really speaks to the hypocrisy of our society with this piece and gets to the marrow of our shallowness and preoccupation with the wrong things. As such, it’s far more a political piece than a crude work.

Admittedly I found a few pieces a little disquieting or just not quite on mark with the perspectives I personally hold. I like to read authors who can write fluidly about both genders not just one, (although I have been personally guilty of this many times myself!) and I didn’t connect with the lines; “America, Julia Roberts whore with a heart of gold / Waiting for the right billionaire to come along And save you from the cold hard streets (and herpes). / Must’ve never read the Buddha’s Dhammapada: / Nobody can Richard Gere you out of the whorehouse but you.” (America).

The reason for this isn’t that there wasn’t truth there, but it tended to read as judging, condemning and slightly shallow. That said, it was the only poem that struck me that way and may lie in how Leys and I view feminism and women differently. Leys goes on to say in this poem, that he loves America despite the racism and homophobic hate, and I felt that was missing the point in how the language of the poem was constructed and someone could argue, well it’s easy as a heterosexual white man to feel this way?

Some of the final three poems in this collection are: The Last Supper is in Sight, The Night I Heard the News and Kaddish for Karen Leys (1952-2018). Being born Jewish myself I was biased in my response to these beautiful poems especially the latter, but even had I not been, it stands as a testimony of love for John Leys’ mother; “for How to summarize a life, a soul/ In words, pictures, and songs/ –What my mother means to me/ in 200 words or less/ — Where to begin, what to say,/ We all know how it ends.” Whilst I might have preferred more of The Darkness of His Dreams had contained poems like this, rather than about Leys idols, he is true to the man he is, and this last poem more than brings his mother to the foreground in an exquisite memorial; “Children of Abraham, / I breathe out Kaddish, / An involuntary response / Only the dead and I can hear.” I think all his readers hear this with the love he possesses for his mother, and she hears it too. The Darkness of His Dreams is after all, not so very dark but quite redeeming and affirming of the longevity of love.

The Darkness of His Dreams is available in Paperback and Kindle formats at Amazon.com

Begin typing your search above and press return to search. Press Esc to cancel.